So who’ll double-dragonfly dare me to eat a waxworm taco?

Previous Next
So who’ll double-dragonfly dare me to eat a waxworm taco?

I RECENTLY FINISHED EDIBLE BY DANIELLA MARTIN, which makes a surprisingly compelling case for eating insects. 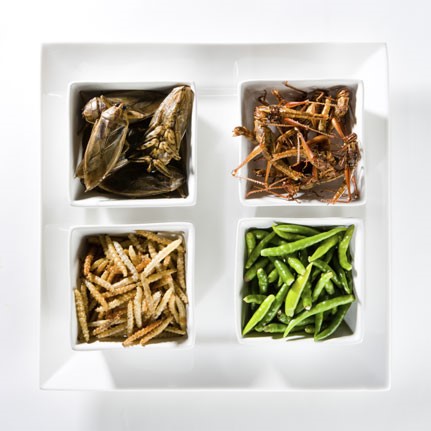 In her introduction, Martin lays the groundwork for the entire work:

“I’m not asking anyone to drastically change their diet, to give up foods they love, or to subscribe to some new overarching system … I’m simply asking you to open your mind — just a little — to give bugs a chance and a place on your palate.”

She goes on to argue that entomophagy (actual term) has many advantages, including an enviable feed-to-food ratio compared to many other protein sources. That’s an interesting thought, especially when she further points out that insects typically convert something we can’t eat, such as grass, into something we can—themselves.

Whether or not I agree with all of her arguments as to why eating insects is “the last, great hope to save the planet,” I did close the book thinking, “Why not, why wouldn’t I include insects in my diet?”

Well, it still grosses me out, that’s why.

I’m not what anyone would characterize as an ambitious eater. At any given restaurant, the cheeseburger and fries usually jump off the menu as the most appealing choice. What I need is a little motivation.

And that’s where you come in. If you’ve ever eaten an insect on purpose, share your story in the comments below. When we get 10 legitimate stories, I’ll do it. I’ll prepare one of Martin’s waxworm tacos and consume it.

So let’s hear those stories.