In today’s crowded food market, consumers have an overwhelming number of choices as they stand in the aisle at the grocery store. There are so many seemingly similar products that when it comes down to it, the product label—and what it does and doesn’t say—has a big influence.

In a nation-wide study of 500 consumers commissioned by Charleston|Orwig and conducted by an independent survey company, 53% of shoppers revealed that a label claim on protein packaging increased their purchase intent. The chart below shows how consumers view the impact of certain label claims on their intent to purchase. 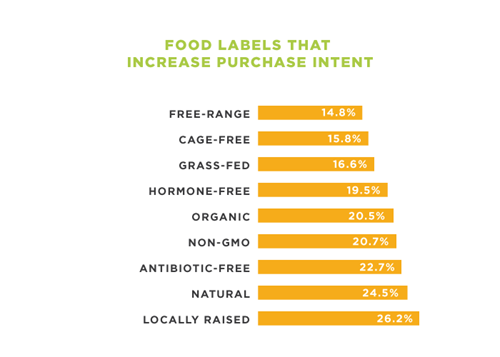 It’s important to note that half of the consumers who indicated one of these label claims had an impact selected three or more as purchase influencers. Consumers interested in various label designations are committed to the concept.

“No antibiotics ever” and “antibiotic free”

More than half of shoppers surveyed say antibiotic claims have an impact on their purchase intent. With almost 30% saying such claims have a strong or high impact.

Of note is that 24% of shoppers in the Northeast say claims of no antibiotics had a high impact on their intent to purchase.

What about “humanely raised” or “animal welfare certified”?

As you can see from the chart below, consumers were again swayed by these claims. Shoppers in the Northeast again claimed the highest impact: 26%. An interesting point here is the high correlation between shoppers who say antibiotic claims have a high impact with those who indicate “humane” claims have a high impact. More than 80% of these are the same people. 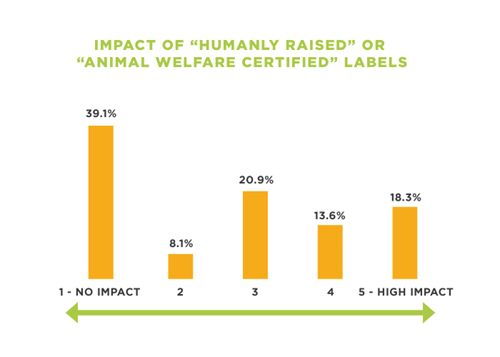 Lab-grown meat—not quite so fast

The concept of lab-grown meat might be common to those of us working in food and agriculture. Consumers are not quite ready for the concept, as the circular chart below shows 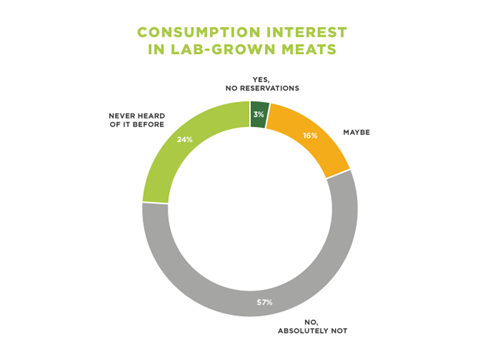 The bar chart breaks out reservations consumers have. Our researcher partner Maeve Webster of Menu Matters points out that the top three concerns might be due to lack of awareness of an early-stage product. 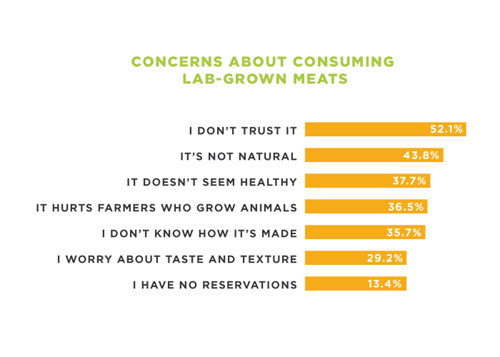 The fact that 36.5% of those surveyed connect a threat to farmers with lab-grown meat is likely something to investigate further. We found this intriguing.

When asked if they would try a plant-based product that had the texture and taste of meat, over 49% of shoppers say maybe or yes. This compared to the 19% who say maybe or yes to lab-grown. Some 20% of younger consumers (18-24) say yes to plant-based “meat” versus 3% of those 55-64. 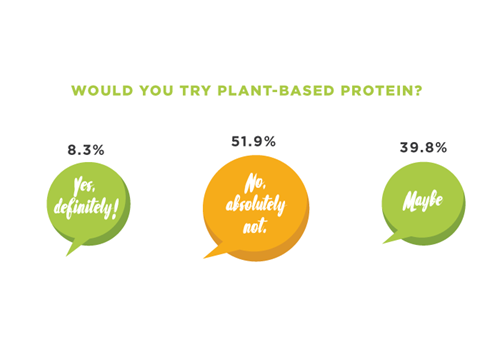 In a separate survey of 200 post-high school students, consumers under the age of 24 say they rate their likelihood of trying plant-based protein roughly six on a scale of one to ten. Clearly there is interest among younger eaters.

Issues surrounding food animals and the protein they produce are important to consumers and are influencing purchase decisions. Producers should note that. Alternative protein sources are also striking a chord, which is why major food companies are investing in these products. For food producers and manufacturers, the packaging and labels on products provide a rare opportunity to communicate directly with an interested buyer.

What’s on your label? Our C|O team can help your brand navigate the future of consumer preferences. Contact Mark G at mark.g@co-nxt.com.

Please fill out the form in order to access our White Papers.
Go to Top