Pourng hemp or cashews on your breakfast cereal?

Previous Next
Pourng hemp or cashews on your breakfast cereal?

Mention the word milk in the same sentence as soy, almond, or hemp anywhere near someone in the dairy industry, and you’re likely to hear a comment about ‘nut juice’ or fake milk.  You’ll get vigorous debate from the opposing side as well usually including some legal definitions and rationale. It’s even led to some members of congress formally raising concern over this labeling issue and asking the Food and Drug Administration to review the issue and take action.

Look back to the 1970s for the source of the current controversy. Soy milk, the first popular milk alternative, solved a lactose-intolerance problem. Soy milk paved the way for other milk alternatives, using everything from cashews to hemp.

Plant-based alternatives provide consumers with options, while other consumers prefer them for other reasons. But how do you “milk” a bean or a nut? The short answer is you don’t. Instead, you soak, blend and strain. After soaking the source in water and blending until nutrients are released into the water, the blended mixture is strained to remove any remaining pulp. Soak. Blend. Strain.

Another option that has become more widely available is ultra-filtered milk. Dairy milk’s molecules of water, fat, minerals and lactose are separated by filters and then recombined in different ratios, resulting in a product with higher protein or no lactose, for example.

With the overwhelming number of options when you walk down what has traditionally been known as the dairy aisle, consumers are wondering: How do they all compare? 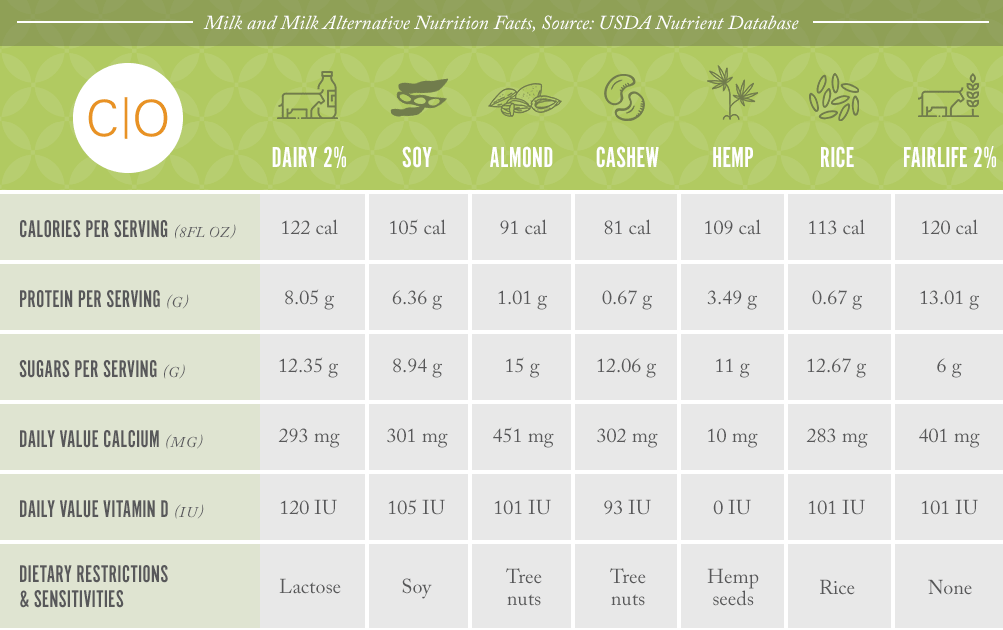 The battle over the definition and labeling of milk is just one of many issues facing the food system. Dairy is in the spotlight now, but this is only part of a larger issue reshaping food as we have known it.