Booths were bigger. Displays more elaborate. Fresh food thinkers were out in force at Atlanta’s 2015 PMA Fresh Summit this past weekend.

Post-show, here’s what we’re talking about and Google®-ing:

Flowers that say everything. And we mean everything! Fresh produce with edible messaging from roses with a Mother’s Day greeting to branded apples from WeatherRX Produce.

Food trucks of the future. With 75% of the population expected to be living in urban communities by 2050, new ways to harvest food are being sought world-over. From floating farms on the ocean to farming in a bubble under the sea, to growing lettuce in space, here’s a mobile greenhouse from NatureFresh with hydroponic tomatoes that may be coming to a store near you soon. 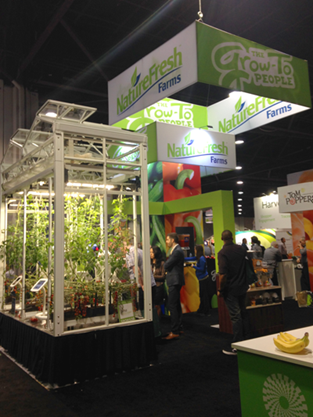 Food waste is just not cool. And there are so many cool companies doing something about it. Packaging made of food waste from Tater Made. Root-to-stem eating (ever tried watermelon peel lightly roasted?) like this chocolate milk made by Suavva Smoothie. It’s made from part of the cocoa plant usually tossed away. Plus, the rise of apps that connect producers with excess food to food shelters. 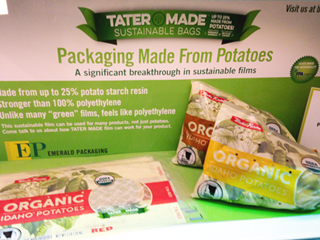 Hiring talent: It’s not about the big bucks. Talent is like water: it flows to where it is most needed. We hear that to survive companies must hire cognitively diverse backgrounds because in 10 years millennials will be 75% of the global workforce. And millennials make 50% of their work choices based on core values of a company, not salary. 86% of millennials see diversity inclusion as necessary at work, but only 56% of today’s leaders share that point of view.

At last, a definition for local. Or is it? We won’t name names, but suffice to say, two national chains’ fresh produce store managers revealed their definition. One said local means grown within a 200-mile radius of store. The other: 76.4-mile radius. Both said they would love the entire aisle to be local, but consumers care more about fresh than local.

Tip to grocers: Want to compete with the local farmer’s market each week? Put one in your store.

Finally, outrageously fresh ideas. From a bubble gum dispenser delivering cherry tomatoes to grab-and-go packing innovations like this—a resealable pouch that looks like a can from Outrageously Fresh. 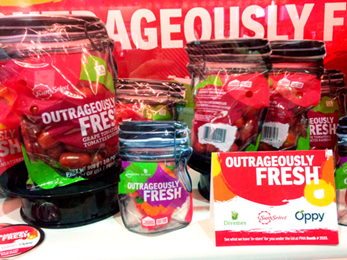